If you are in London I do recommend visiting the Royal Academy to see their latest exhibition "Modern British Sculpture". It will be on display from 22 January to 7 April 2011. I read somewhere that the Academy hasn't displayed any modern British sculpture for over thirty years now. 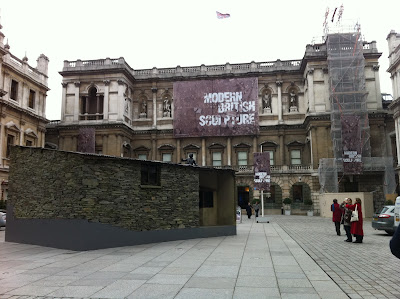 The collection spans the whole of the 20th century, starting with the early sculpture that were mostly imitations of foreign works (from Mexico, Africa, Cuba etc..)

I enjoyed the works that were dated around the 1960s, which touched on the aspect of ground - earth - material - our natural surroundings. Clothes, articles, books were jammed into various nooks. Installation art at its best.

The only work I did not appreciate was by Damien Hirst, titled "Let's Eat Outdoors Today". It speaks about social classes and the differences between them, and yes it was intriguing, but the fact that tens of flies were being suffocated to death did not strike me as humane at all.

The exhibition as a whole is definitely worth checking out.

Posted by thecollector at 2:04 PM